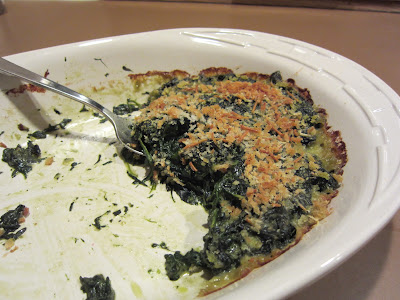 I made this baked spinach recipe for a dinner party and it got rave reviews.  In fact, everyone thought it tasted so good that you could serve it as an appetizer and scoop it up with tortilla or pita chips.  It really is that good!  I had to share it with more people so I brought it to Thanksgiving.

Prepping and cooking the spinach was really quick because I didn't have to stem the leaves.  The stems on baby spinach are soft when they're cooked.  If you use regular spinach, the stems won't softened as much, so you should remove them.  Since spinach is the main flavor, I recommend using fresh leaves, but in a pinch, you could probably use frozen spinach that's been thawed and squeezed of excess water.

You can definitely make this ahead too.  You can stop after the spinach is cooked and finish the rest closer to dinner.  You could also prep everything up to adding the cheese and seasoning the spinach.  Then just before you're ready to put it in the hot oven, add the remaining cheese and breadcrumbs.

Stem and wash the spinach, draining it but letting drops of water still cling to the leaves. Place the spinach in a large pot covered with a lid over high heat. (Since spinach takes up some much space, I had to cook it in my largest stockpot in 2 batches.)  Cook, stirring occasionally, until wilted (2-4 minutes for baby spinach, 4-6 for regular spinach). Transfer the spinach to a colander, fill the pot with cold water, and immediately return the spinach to the pot with the cold water to stop the cooking. Drain again. Working with a handful at a time, squeeze the spinach to extract as much excess water as possible. Coarsely chop the spinach. (You should have about 3 cups of chopped spinach.)

Wipe out the pot and then melt 2 tablespoons of the butter over medium-high heat. Stir in the chopped spinach. Cook, stirring frequently, until all of the moisture has been boiled off (when the spinach starts to stick to the pan).

Reduce the heat to medium and sprinkle the flour over the spinach. Cook, stirring frequently, for about 2 minutes. Stir in about 2/3 of the cooking liquid a small amount at a time, scraping the bottom of the pan as you go. When the liquid has been added, stir for another minute or two. If needed, add in the remaining liquid. Season with salt and pepper to taste.

Preheat the oven to 375. Mix ½ cup of the shredded cheese into the spinach mixture and then spread the mixture into a lightly greased baking dish. Toss the remaining ¼ cup of cheese with the bread crumbs and sprinkle the mixture evenly over the top. Melt the remaining 1½ tablespoons of butter and drizzle over the top. Bake until lightly browned and heated through, about 30 minutes.
Posted by Sarah Berridge at 7:29 AM

Email ThisBlogThis!Share to TwitterShare to FacebookShare to Pinterest
Labels: side dish, veggies