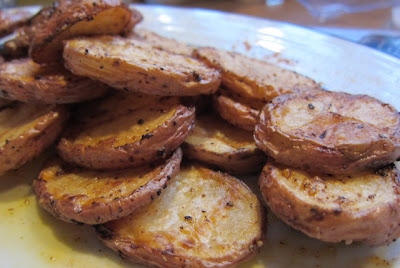 You guys have to try grilling potatoes!  I don't know how this idea escaped me all these years, but I'm in love and make them all the time now.

I needed a side to go with the steaks with cilantro chimichurri and I wanted to grill it.  I had red potatoes on hand and a light bulb went off.  Having never done this before, I did a little Googling, kept the recipe simple and hoped for the best.  The crunchy potatoes were my favorite, but the skin on each potato has a nice crispness in contrast to the tender centers.  Some of the grill flavor comes out in the potatoes too.

COOK'S NOTE:  I've been using salt, pepper and chili powder for seasoning, but use whatever strikes your fancy. 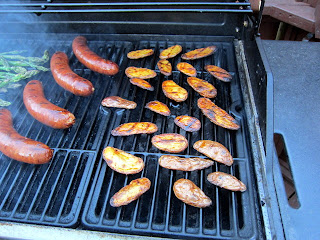 Preheat the grill.  Coat potato slices with olive oil and seasonings.  Grill the potatoes in a single layer for about 5 minutes on each side or until potatoes are golden and cooked through.

After removing them from the grill, taste and sprinkle with a touch more salt if needed.  These can be served with a dipping sauce, but they are pretty tasty one their own. 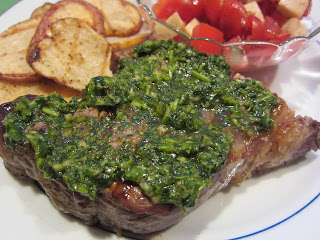 Don't you love when you can cook most of your dinner on the grill?  With the exception of the tomato salad, I did just that with this meal.  I grilled some ribeye steaks and thinly sliced red potatoes and we were good to go.

Traditional chimichurri is made with parsley, but when I saw this steak with cilantro chimichurri recipe I knew I would actually make it.  I already had cilantro in the fridge and ribeyes were on sale.  This dinner was fabulous!  I don't usually cover up a steak, but the cilantro chimichurri gave it something a little extra.  I love the slight heat that comes from the raw garlic in the sauce. 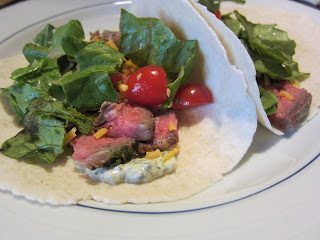 Heat grill to high heat. Allow meat to come to room temperature and rub the seasonings onto the steaks. Grill over high heat until desired doneness.