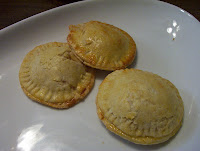 Rueben Hand Pies:  I was looking for a pie that could be an appetizer.   When I found these ham and cheese bites, I knew I had to turn them into baby ruebens.  I made extra dough when I made the chicken pot pie, so I used that instead of store bought.  Instead of the ham and cheddar, I used corned beef swiss cheese.  I also drained some sauerkraut really well and added some of that also.  It's not a rueben without the sauerkraut right?  I made some Thousand Island dressing for a dipping sauce because it wasn't worth buying a whole bottle just for these apps.

Chicken Pot Pie:  I used a recipe from an episode of Jacques and Julia.  On the TV version they use only a smidge of cream, but in the cookbook for that show they used a lot more.  I've tried making it both ways and it's definitely better with only a smidge of cream.  The additional cream drowns out the delicious flavor of the concentrated chicken stock. 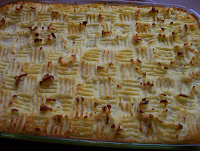 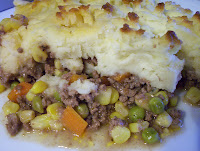 Shepherd's Pie:  I used a mish-mash of shepherd's pie recipes that I found online.  I plan on making it again, and when I do I'll share the final recipe.  I created some texture on the potatoes to encourage browning. 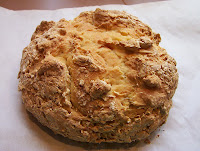 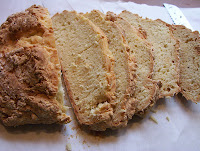 Irish Soda Bread:  After looking at a bunch of recipes, I noticed some had raisins, currants and caraway seeds.  I didn't want any of that so I went with this recipe from Taste and Tell. 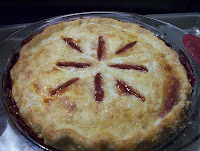 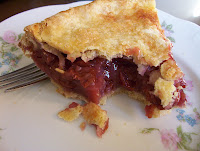 Cherry Pie:  This was is the first fruit pie I've ever made!  I used my Aunt Ginny's recipe for the crust and filling which I will reveal in the next blog post (found here). 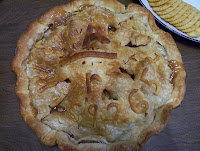 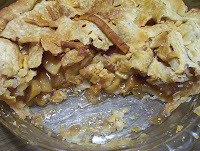 Apple Pie:  Our friend Mike wanted to contribute so he made his first pie also.  He made an apple pie decorated with pi's equation for an area of a circle and pi's number up to the first 10 decimals.  Not only did it look good, but it was really tasty too!  It was everything an apple should be: flaky crust with a warm mix of apple and cinnamon flavor. 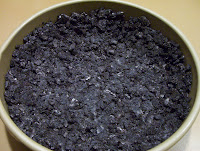 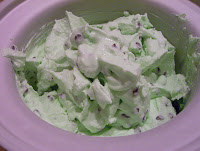 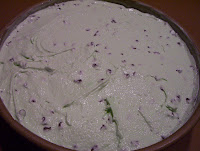 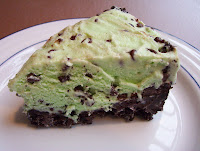 Grasshopper Ice Cream Pie:  Here's a quick and dirty recipe for you:

Crush about 2 sleeves of Oreos and mix with a bit of melted butter (~5 Tbsp) then smush into a pie pan or spring-form pan.  Make or buy mint chocolate chip ice cream (1.5-2 qts) or Mint Ting a Ling if you're in Perry's country.  Give it a chance to soften a bit, then spread it evenly into pan.  Cover tightly with plastic wrap and foil, then set it in the freezer for a few hours to harden and set up.  Make or buy your favorite fudge sauce.  When it's time to serve, cut the pie with a hot knife, then spread the hot fudge over each slice.  Dollop with whipped cream if desired.

Posted by Sarah Berridge at 7:53 AM