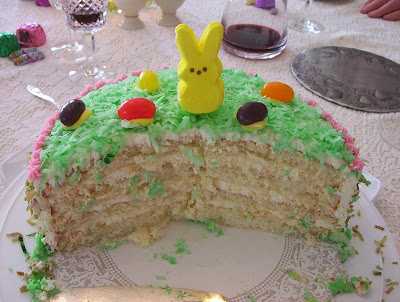 Whenever we have dinner with my in-laws, I usually get to be in charge of dessert.  Easter was with them last year, and I was just coming off four weeks of the Wilton cake decorating classes.  Since I had made and decorated so many cakes recently, I didn't want to make another one for Easter.  However, I had buttercream leftover from my decorating classes that were springy colors.  I didn't want to waste the frosting so I off I went to bake another cake.
I decided on Baking Illustrated's Coconut Cake.  They recommend using cream of coconut instead of coconut milk because the fat content in coconut milk varies so much between brands.  This was the first time I had set out to look for cream of coconut, and had a heck of time finding it.  So here's a tip for you:  Look in the ethnic food section and the drink mixer section in your grocery store.
Between the cake batter and the frosting, the recipe uses the contents from one can.  UNLESS, you screw up and forget to add the sugar and don't remember until the cake's been in the oven for 15 minutes!  Then you'll end up using a second can to make up for your mistake.  Oops!
This cake was moist and coconutty and I would definitely make it again.  I wasn't a big fan of the coconut frosting on it's own, but when you eat it with the cake it was good.
Coconut Cake
From Baking Illustrated
For the cake:
1 egg
5 egg whites
3/4 cup cream of coconut
1/4 cup water
1 tsp vanilla extract
1 tsp coconut extract
2 1/4 cups cake flour, sifted
1 cup sugar
1 Tbsp baking powder
3/4 tsp salt
12 Tbsp (1.5 sticks) unsalted butter, cut into 12 pieces, softened, but still cool
2 cups packed sweetened shredded coconut
Green food coloring, optional
For the frosting:
4 large egg whites
1 cup granulated sugar
pinch of salt
1 pound unsalted butter (4 sticks) cut into 6 pieces, softened, but still cool
1/4 cup cream of coconut
1 tsp coconut extract
1 tsp vanilla extract
For the cake: adjust oven rack to lower-middle position and heat oven to 325. Grease two 9-inch round cake pans with butter and dust with flour, tapping out the excess.
Beat egg whites and whole egg in large measuring cup with a fork to combine. Add cream of coconut, water, vanilla, and coconut extract and beat with fork until thoroughly combined.
Combine flour, sugar, baking powder, and salt in the bowl of a stand mixer fitted with the paddle attachment. Mix on lowest speed to combine, about 30 seconds. With mixer still running on lowest speed, add butter 1 piece at a time, then beat until mixture resembles coarse meal, with butter bits no larger than small peas, 2 to 2 1/2 minutes.
With the mixer still running, add 1 cup of egg mixture. Increase speed to medium-high and beat until light and fluffy, about 45 seconds. With mixer still running, add remaining 1 cup egg mixture in steady stream (this should take about 15 seconds). Stop mixer and scrape down bowl with rubber spatula, then beat at medium-high speed to combine, about 15 seconds. (Batter will be thick.)
Divide batter between cake pans and level with offset or rubber spatula. Bake until deep golden brown. Cakes pull away from sides of pans, and toothpick inserted into center of cakes comes out clean, about 30 minutes (rotate cakes after 20 minutes). Do not turn off the oven if you are going to toast your coconut.
Cool the cakes on wire racks for about 10 minutes then loosen the cakes from the sides of the pan with a paring knife, invert the cakes onto racks, then reinvert them so the top sides face up; cool to room temperature.
Coloring the Coconut (optional):  If you want to make the coconut look like grass, you can put the shredded coconut into a large bowl with a few drops of green food coloring.  Mix until all the coconut is even and the desired color, add more food coloring if needed.  If you go with this option, do not toast coconut.
Toasting the Coconut (optional): While cakes are cooling, spread shredded coconut on rimmed baking sheet.  Toast in oven until coconut is a mix of golden brown and white, about 15-20 minutes, stirring 2 or 3 times. Cool to room temperature.
For the Buttercream: Combine the egg whites, sugar, and salt in a mixing bowl. Set the bowl over a saucepan containing 1 1/2 inches of barely simmering water. Whisk constantly until mixture is opaque and warm to the touch and registers 120 degrees on an instant-read thermometer, about 2 minutes.  (Note that this temperature is not hot enough to eliminate the unlikely presence of salmonella bacteria in the eggs.)  Remove from the heat.
Transfer bowl to the mixer and beat whites on high speed with whisk attachment until barely warm (about 80 degrees) and whites are glossy and sticking, about 7 minutes. Reduce speed to medium-high and beat in butter 1 piece at a time. Beat in cream of coconut and coconut and vanilla extracts. Stop mixer and scrape bottom and sides of bowl. Continue beating at medium-high speed until well combined, about 1 minute.
To Assemble the Cake: Cut the cakes in half horizontally using a long serrated knife so each cake forms 2 layers. Put a dab of icing on a cardboard round cut just larger than the cake. Center one cake layer on the round. Place a large blob of icing in the center of the layer and spread it in to the edges with an icing spatula. Hold the spatula at a a 45 degree angle to the cake and drag it across the surface to level the icing. Repeat with remaining cake layers. To ice the sides of the cake, scoop up a large dab of icing with the tip of the spatula and spread it on the sides with short side-to-side strokes. Sprinkle the top of the cake with coconut. Then press the coconut into the sides, letting the excess fall back onto a baking sheet.
Posted by Sarah Berridge at 7:53 AM