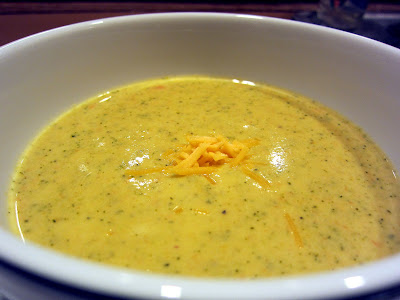 Okay, so you may have noticed that I shared a lot of appetizer dip recipes throughout January.  It wasn't an accident.  I'm going to try something a little different.  Each month I'm going to have a theme and I'll post a related recipe once a week.

January was dips, and February is going to be soups.  I'm still going to post various non-theme related recipes as well.  This will be an excuse to commit myself to making a lot of items on my "To Make" list throughout 2012.  And the themes will force me to actually post about the food, because as of now, less than half of the finished ones have been blogged.


Now on to the soup!
Mmmm broccoli cheese soup.  I chose this recipe because it doesn't have any cream, and it's pretty similar to a Panera copy cat recipe I found.

I was originally going to make bread bowls, but asked Kevin what he preferred.  I ended up making homemade bread served on the side.  I love dipping bread into thicker soups like this, no spoon needed.

No immersion blender?  Use a regular blender and follow these tips for blending hot soup.

In a large stockpot or Dutch oven, melt 2 tablespoons of butter over medium heat.  Add the onion to the pan and saute until tender, about 5-7 minutes.  Add the carrots and garlic to the pan and cook a couple minutes more.  Stir in the broccoli, chicken broth and onion salt.  Bring the mixture to a boil, then reduce the heat to a simmer.

In a medium saucepan, melt remaining butter.  Add the flour and cook for 1-2 minutes until golden brown, whisking constantly.  Whisk in the milk and cook until the mixture thickens and bubbles, about 5 minutes.  Once the mixture has thickened, whisk in the cheese until completely melted.  Remove from the heat and add the cheese sauce to the soup pot.  Allow to simmer until warmed through and broccoli is tender.  Season with salt and pepper to taste.  If desired, puree the soup with an immersion blender for a smooth texture.